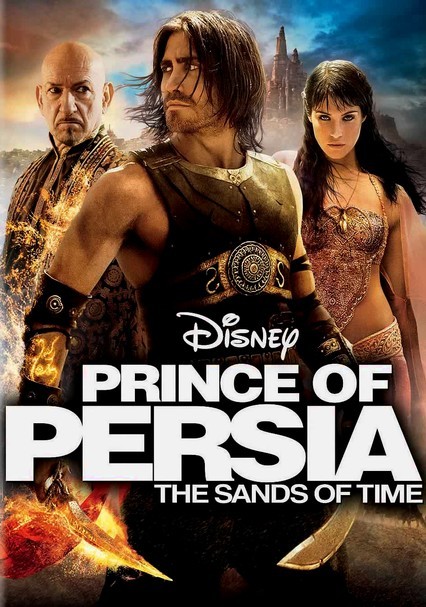 2010 PG-13 1h 56m Blu-ray / DVD
The Sands of Time is a mystical dagger that gives its holder control over the flow of time. Prince Dastan joins forces with a spunky princess to stop the weapon from falling into the wrong hands in this action-adventure based on a video game series.

Parents need to know that this fantasy adventure -- based on a popular, teen-rated video game -- is high on action, but relatively low on anything else potentially objectionable for young teens (though, like many big action movies, the marketing targets kids too young for this kind of action). The sexuality is limited to some obvious flirting (longing gazes and occasional chaste touching) and a couple of kisses, and strong language is virtually non-existent. Violence, however, is prevalent throughout the movie, with the protagonist constantly on the run, being chased, and having to dodge arrows, blades, flames, and snakes. Despite the amount of violence, it's still not as gory or bloody as comparable movies. Ultimately, the message of family and honor is a valuable one, and the lovely princess isn't just a damsel in distress.

Some flirting, mild innuendo, revealing outfits, and a couple of rather chaste kisses. In one scene, a harem-like group of bikini-clad women appear.

As in most action adventures, there are a lot of chase scenes -- in the desert or marketplaces or castles. There are definitely deaths -- due mostly to swords and knives, and in one case an assassination by a burning cloak -- but the violence isn't grisly or overly bloody. The threat of violence is always present, however, and the assassin squad is creepy and frightening. They use snakes and ninja-like sword skills to track down and kill their intended target.

The most important message of the movie is that the bonds of brotherhood and family should be stronger than greed, competition, envy. The king also espouses the idea that a great leader does what's right even if it's not popular.

There are no product placements in the movie, but the movie could be considered one huge tie-in to the popular video game.

A character asks "Have you been drinking," when an archer misfires. Dastan looks a bit tipsy in one scene, but there's not a drink in his hand.