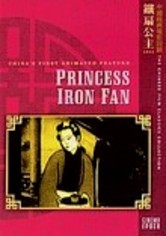 1941 NR 1h 13m DVD
Based on the 16th-century tale Journey to the West, this allegorical film made in 1941 was China's first full-length animated feature. It follows the adventures of Monkey King, a Tang Dynasty monk, as he travels westward. Monkey King and his friends try to save a burning village, but to do so they must obtain an iron fan owned by the obstinate Princess Iron Fan. The story spoke to Chinese resistors, prompting them to unite against the Japanese.