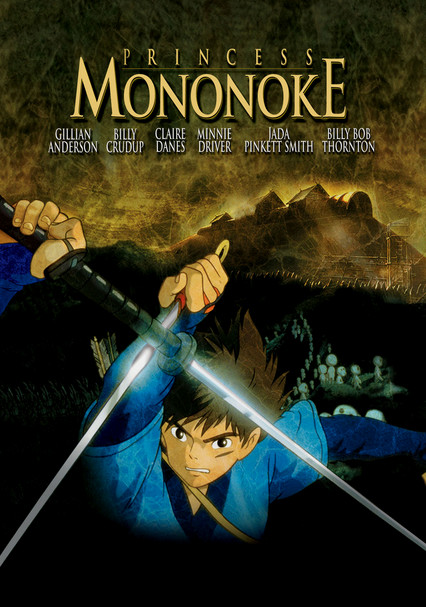 1999 PG-13 2h 14m Blu-ray / DVD
Inflicted with a deadly curse, the young warrior Ashitaka heads west in search of a cure. There, he stumbles into a bitter conflict between Lady Eboshi and the proud people of Iron Town, and the enigmatic Princess Mononoke, a young girl raised by wolves, who will stop at nothing to prevent the humans from destroying her home, and the forest spirits and animal gods who live there.

Parents need to know that this movie is darker and more intense than many of Hayao Miyazaki's other classics. Although it's an animated fantasy, it boasts the scope and grandeur of a live-action historical epic and has many battle scenes and other violent sequences, as well as additional gruesome elements. While it's probably too much for most tweens, older kids will be thrilled and engrossed, and teens will love it.

The boar god who dies in the opening scene is covered in swirling snakes. When it dies, it decomposes down to its skeleton in seconds. Battle scenes involving samurai bandits include shots of dismemberment and decapitation. The boar gods die gruesome deaths. Blood is visible when characters are wounded. All presented in the context of a violent era involving warring factions and a life-or-death struggle between man and animal.