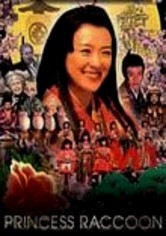 2005 NR 1h 51m DVD
Premiering at the 2005 Cannes Film Festival, Seijun Suzuki's dreamlike musical chronicles the wondrous romance between Prince Amechiyo (Jô Odagiri) and a raccoon spirit (Ziyi Zhang) who's transformed herself into a beautiful woman. Banished by his jealous father, Amechiyo wanders the forest until Princess Raccoon finds the handsome royal and takes him back to her castle. Hiroko Yakushimaru co-stars in this joyfully extravagant production.