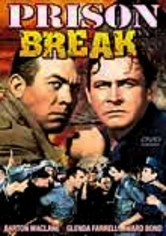 1938 NR 1h 13m DVD
When his girlfriend's brother turns up dead, fisherman Joaquin Shannon (Barton MacLane) confesses to the crime -- even though he isn't the least bit responsible for it -- to shield the pal he suspects did the deed. Sent to the slammer for at least a year, if not more, Shannon vows to keep a low profile, but a bullying inmate lands him in even hotter water than he already is. And when he's finally free, life on the outside isn't much better.