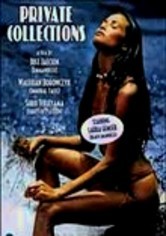 1979 NR 1h 43m DVD
This provocative anthology of short films from three masters of erotica -- Just Jaeckin, Shuji Terayama and Walerian Borowczyk -- centers on a common theme of women using their feminine wiles to manipulate unsuspecting males. In L'île aux Sirènes, four native lovelies rescue a castaway sailor; in Kusa-Meikyu, a Japanese boy is seduced by the song of a village madwoman; and in L'Armoire, an upper-crust Parisian procures a hooker for the night.