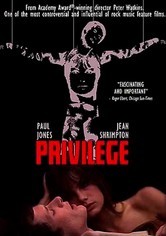 1967 NR 1h 43m DVD
Rock star Steven Shorter (Paul Jones) has British music fans in the palm of his hand, so much so that it seems they'll do anything he says -- even if what he says involves buying apples, rocking out to "Onward Christian Soldiers" and throwing the Nazi salute. Of course, Steven is so wrapped up in being Britain's most popular musician that he doesn't realize the error of his ways. Can a pretty artist (Jean Shrimpton) help him see the light?