Professor Layton and the Eternal Diva 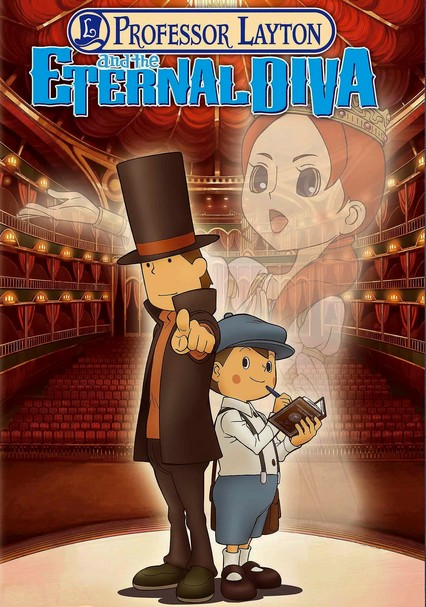 Professor Layton and the Eternal Diva

2011 NR 1h 35m DVD
Amateur detective Professor Layton is invited to a former student's operatic performance, just as London is rocked by a string of disappearances. But it isn't a coincidence when the clues lead the professor directly to the opera house itself.

Parents need to know that Professor Layton and the Eternal Diva is a feature-length anime based on the characters of a popular and highly regarded series of Nintendo DS video games. Viewers can choose between an English-language soundtrack or a Japanese-language soundtrack with English subtitles. The movie contains mild fantasy violence, such as killer sharks, angry wolves, martial arts, giant robots, explosions, and sword fights, but even though death is discussed, no one is actually injured or dies. There's also a comical instance of a minor character pouring a large glass of wine. The main characters, a professor and his young apprentice, are excellent role models, demonstrating kindness, compassion, intelligence, and even good manners. A message about remembering loved ones after they die is positive, but not for all younger viewers.

The movie contains a fair amount of fantasy violence with some chasing and fighting and talk of death, plus a dark tone. A bad guy threatens the lives of innocent bystanders (though no one actually dies). There are killer sharks and scary wolves. A young boy is sometimes in peril, though he's very brave and resilient. One character uses martial arts combat. There's a sword fight, a giant robot rampage, and explosions.

The message here is that our loved ones can live on eternally in our memories. "Eternal life" is only achieved through the love and care of the people around you. Though it's a good and heartfelt message, it's also a bit on the dark side because it requires young viewers to think about death and its repercussions.

The movie is based on a popular series of Nintendo DS video games.

A secondary character humorously pours himself a huge, overflowing glass of wine.