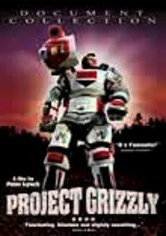 1997 NR 1h 12m DVD
Troy Hurtubise, a metalworker obsessed with grizzly bears, is the focus of this unusual documentary. Attacked by a bear in 1984, the eccentric inventor became driven to fashion an indestructible suit of armor from which he could more safely observe the objects of his fascination. Hurtubise's odd ramblings and footage of the absurd, punishing tests to which he subjects his protective garb make for strangely compelling viewing.