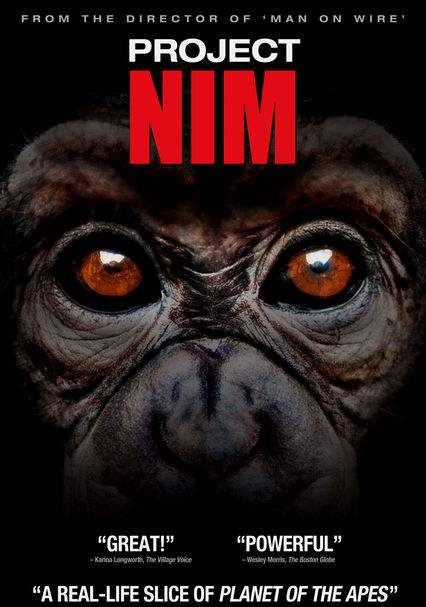 2011 PG-13 1h 33m DVD
Oscar-winning filmmaker James Marsh peers inside the landmark 1970s experiment for an unflinching look at Nim, the chimp whom scientists raised as human and taught sign language to prove that apes can communicate like humans.

Parents need to know that this engrossing, moving documentary about a groundbreaking study of animals and language has some intense material that may be too much for younger viewers. There are frank discussions about how a chimpanzee violently attacks his caretakers (some moments are dramatized, showing not the attacks themselves but the bloody aftermath) and references to drug use, even by the chimp. There's some swearing (including "f--k" and "s--t"), and participants talk about sexual relationships among colleagues, some of which don't end well. That said, teens and adults will be fascinated by both the scientific study at the heart of the movie and the politics and tensions behind it, and the movie is sure to spur discussion about animal rights and cruelty.

Candid conversation about affairs and the like. No nudity, though there's a reference to a chimpanzee's self-pleasuring.

Two frighteningly aggressive attacks by a chimpanzee are described in detail and shown in hazy flashback; some spattered blood is seen. Some scenes depict caged animals who aren't treated well.

The movie's more sad than anything, but it does come across as a good thing that Nim's story is finally being told and that steps are being taken to ensure the welfare of animals who've been adopted into the human world.

Some participants are shown smoking pot, including the chimpanzee. A mention of alcohol.