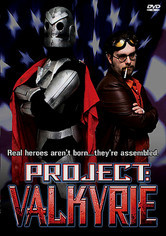 2002 NR 1h 23m DVD
A vintage 1940s robot and its owner must stop a vicious virus before it transforms the entire city into an army of cyberkillers in this madcap action tale with comic book flair. The trouble begins when Jim inherits Valkyrie, his grandfather's World War II-era android that has an archenemy that just won't give up: a Nazi virus that turns its victims into mindless murdering machines. Now, it's up to Jim and Valkyrie to save the day.