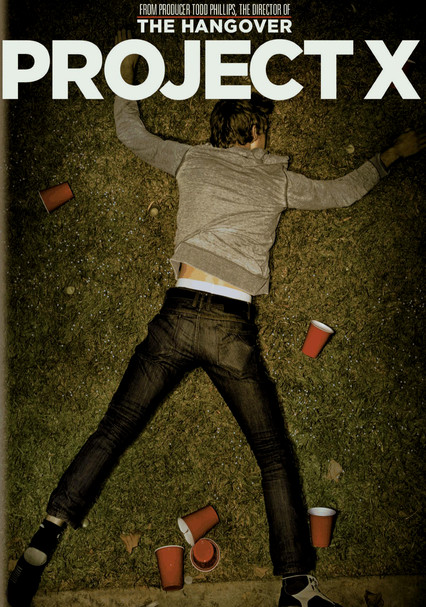 2012 R 1h 28m Blu-ray / DVD
Deciding to throw a party when their parents go out of town, three high school geeks hope to lure chicks to their revelries by posting an invitation online. But after the invite goes viral, the party escalates into a frenzied free-for-all.

Parents need to know that Project X -- a very raunchy comedy about three high school seniors who throw a huge party that spins wildly out of control -- is packed with constant strong language ("f--k," "s--t," and much more), topless teens, sexual situations, graphic sexual innuendo, and excessive teen drinking and drug use (Ecstasy and pot). Punches are thrown, and though there's no actual fighting, the party has an increasing air of danger and violence (a flamethrower appears in the final act). The movie is funny in a shocking way, but parents will be appalled at its message: that a shy teen "needs" a huge party to break out of his shell and become a social success, regardless of the fact that the cost is thousands of dollars in damage.

Many teen girls go topless in the swimming pool. One girl flirts heavily with the birthday boy, kissing and licking his neck. They begin to undress for sex (their tops are removed) and climb onto a bed, but they're interrupted. The main character kisses two women. Minor characters are seen sporadically making out or engaging in foreplay. Also heavy, graphic sexual innuendo.

Most of the violence consists of quick, drunken outbursts at the party. Some punches are thrown, and there's a shoving match, but very little actual fighting. A little person punches several partygoers in the groin. A Taser is used. A bully shows up in a couple of scenes, but nothing much happens with him. A flamethrower is used, and the user eventually catches on fire himself.

The movie's central theme seems to be that the shy main character "needed" a party to help him out of his shell -- and that the rampant destruction of property and thousands of dollars in repairs were worth it. (In the epilogue, the father, though upset, even seems proud of his son.)

Teens drink alcohol of all types excessively throughout the movie. Ecstasy is passed out at the party, and most teens take some. The three main characters buy and smoke pot.