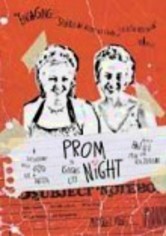 2002 NR 0h 54m DVD
By returning to her hometown of Kansas City, filmmaker Hali Lee set out to uncover the appeal of the prom without resorting to corsages and corny clichés. Focusing on a range of diverse prom-goers -- from Smurf, the inner-city track star who dreams of being the prom king, to Gayla, an openly lesbian teen who participates in an alternative event -- Lee captures the ritual that keeps the tradition alive and the individuality that keeps it fresh.