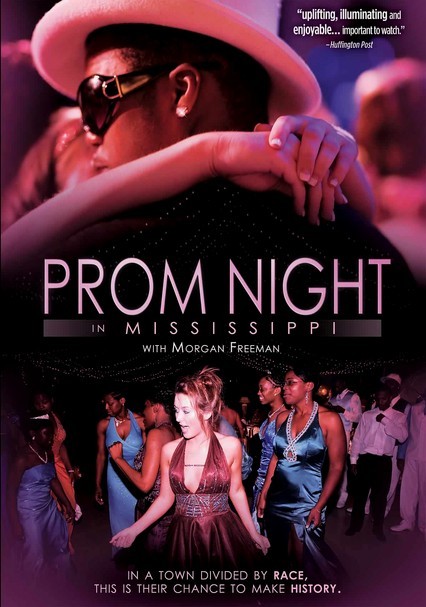 2009 NR 1h 31m DVD
With actor Morgan Freeman's support, Mississippi's Charleston High School stages its first senior prom to integrate both black and white students. This documentary examines the perspectives of several seniors as they prepare for this historic event. A group of disapproving white parents, who refused to meet and talk with the filmmakers, organized a separate White Prom for their children to attend.

Parents need to know that this documentary's frank discussion of a sensitive topic -- racism -- includes some unbleeped swearing and racist language, including regular use of "N" word by both African Americans and Caucasians. Some violent acts are described, including fist fights between students, and there's a brief shot of a particularly grizzly photo of a dead man hanging from a tree. Students also talk about underage sex and drinking, but most of the teens who are prominently featured are positive role models.

Some students discuss having sex, with a focus on the perceived "fear" of interracial sex. Another student talks about having had both African-American and Caucasian "lovers" and asserts that they're all the same; it's what's inside that counts.

An archival image of a dead African-American man hanging from a tree is shown while a student talks about another hanging that took place in the town square. Another student describes a verbal fight between a Caucasian student and an African-American student that escalated due to the Caucasian student's allegations that the other student threatened her with a gun; another recounts a fight that broke out at the "white" prom between two students and a parent, who slapped one of the rabblerousers. At the integrated prom, male and female students engage in a dance battle that looks violent (ie., it involves some body pushing/intimidation) but isn't meant to be.

Audible words include mild terms like "ass" and "hell," as well as a few unbleeped instances of "f--k." The "N" word is also used quite a bit, both as a hate and a non-hate term.

The movie reinforces the idea that people are just people -- no matter the color of their skin -- and that change is truly possible if you work for it.

The soundtrack includes songs by popular artists like Lil Wayne, Usher, Feist, and One Republic. Rap act Kamikaze plays at the prom.

A character describes underage drinking in a limousine on the night of the "white" prom, saying students were "getting tipsy, getting crazy." Another student claims that some students drink and "get drunk every weekend."