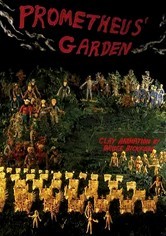 1988 UR 0h 58m DVD
Inspired by the Greek myth of Prometheus, the titan known for stealing fire from King Zeus in order to give it to the mortals, this film is recognized as the first over which creator Bruce Bickford retained creative control. Celebrated for his startlingly original voice and perspective, Bickford became an international cult figure due to his collaborations with musician Frank Zappa (Dub Room Special, Baby Snakes, The Amazing Mr. Bickford).