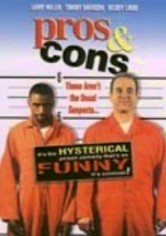 1999 R 1h 44m DVD
Two ordinary Joes (played by Tommy Davidson and Larry Miller, who also wrote the script) wind up in jail for a crime they didn't commit in this deft comedy. Desperate to escape, they hatch a plan to adopt different identities, but they aren't sure they have the wherewithal to get the job done. The alternative's even worse, however, so they jump into the fray, causing a ruckus in prison in their attempts to finally -- and permanently -- get away.