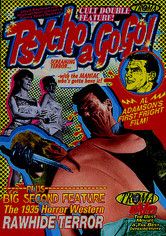 1965 UR 1h 30m DVD
Psycho killer Roy Morton murders innocent victims who own jewelry that he thinks belongs to him. Filmed in Chill-O-Rama, this bloodcurdling movie was directed by legendary schlockmeister Al Adamson. A special bonus feature, The Rawhide Terror, is also included in this set. This "lost" 1935 film was co-written and produced by Adamson's dad, proving conclusively that nepotism is alive and thriving in Hollywood!