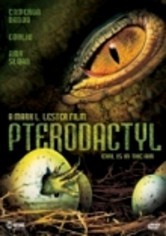 2005 NR 1h 29m DVD
While leading his unit into the Turkish forest to catch a terrorist, a special ops commander (Coolio) runs into a professor (Cameron Daddo) and his team of researchers, who are searching for clues to the earth's past. But as the two disparate groups trudge up the sides of a dormant volcano, they have no idea that what lies at the end of their journey is a batch of unhatched pterodactyl eggs. Can they work together to stop a deadly live birth?