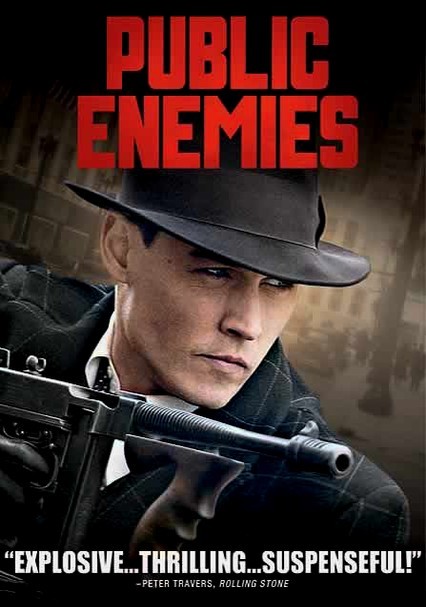 2009 R 2h 20m Blu-ray / DVD
In the shadow of the Great Depression, criminal minds are thriving -- notorious men such as John Dillinger, "Baby Face" Nelson and "Pretty Boy" Floyd -- and it's up to J. Edgar Hoover and the FBI to bring them down in this gritty crime drama.

Parents need to know that this 1930s-set crime drama starring Johnny Depp as infamous bank robber John Dillinger is full of very realistic violence that some will find hard to take. Gun battles are frequent and intense, and characters suffer gory wounds and die. A woman is beaten during an interrogation scene; other characters are shot down in cold blood. Although there's not too much in the way of sexual content (aside from one somewhat steamy love scene with no nudity) or language (there's one use of "f--k," plus a smattering of other salty words) for an R-rated film, the movie's focus on the differences and similarities between cops and crooks yields complex role models and messages. Some law enforcement officers are depicted as corrupt and cruel, while others are dedicated, dignified, and diligent; similarly, there are cold, calm professionals among the film's criminals, as well as hair-trigger sociopaths. Expect lots of period-accurate smoking and drinking.

Some kissing and writhing in one fairly steamy love scene; intercourse is clearly implied, but no sensitive body parts are shown. A woman relaxes naked in a bathtub, shielded artfully from view (you only see her legs, arms, and shoulders). Depictions of prostitutes and prostitution as part of the criminal underworld; some women shown in states of relative undress, but no nudity.

Extensive, very realistic violence (particularly with guns), including close-range shootings; gaping bloody wounds; and more. Many extended gunfight scenes with barrages of noise and debris. Several characters die on screen. Characters are also beaten, and hostages are taken. A woman is roughly interrogated -- she's slapped and hit and not allowed to use the bathroom. Another prisoner is pressed for information by investigators while in enormous pain from a gunshot wound to the head.

Despite -- or, in many ways, because of -- its violence, the movie offers a remarkably accurate look at social conditions in Depression-era America -- as well as a series of cautionary tales about the moral and physical cost of crime. Dillinger may be a bank robber, but he nonetheless has a moral code about what he will and won't do; similarly, lawman Melvin Purvis has the law on his side but also feels challenged by the moral issues of what his work entails.