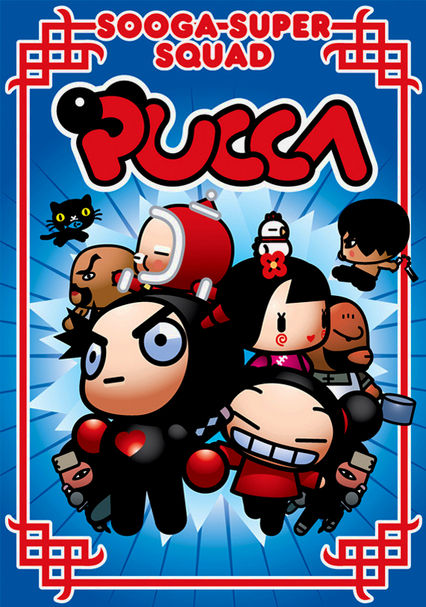 2009 TV-Y7 1 season
In this animated series from South Korea, 10-year-old Pucca and her ninja-boy hero Garu -- along with pals Abyo and Ching and pet cats Yani and Mio -- have their hands full fending off rivals in frenetic Sooga Village.

In this animated series from South Korea, 10-year-old Pucca and her ninja-boy hero Garu -- along with pals Abyo and Ching and pet cats Yani and Mio -- have their hands full fending off rivals in frenetic Sooga Village. But when the kung fu clashes have been completed and the races run, Pucca and Garu always find themselves back at her uncles' noodle house, slurping steaming bowls off noodles and stealing kisses.

Parents need to know that this stylized cartoon series is hampered by a silly 10-year-old female character whose zealous pursuit of her crush entirely consumes her. When she's not smothering him with unwanted attention (including hugs and attempts to kiss him), she's tapping into her own inner warrior and fighting the bad guys who challenge him. Although his red-faced embarrassment shows his disgust at her advances, he never lets her know how he feels. While the show is aimed at the 6-11 age group, the plot (with the significant exception of the inappropriately obsessive love interest) is ridiculously simplistic and far-fetched for kids that old, leaving only the flashy violence to keep their attention.

The female character makes overt attempts to catch the eye of her uninterested crush. Her unwanted signs of affection (hugs, attempted kisses, moony eyes) turn his face red in anger and embarrassment, but her fixation never wavers.

While no physical harm comes to any character, ninja battles include kicking and weapons (throwing stars, blunt swords, nunchucks). Other fantasy violence features whizzing flaming arrows, logs falling on heads (and cracking in half, leaving the victim unharmed), and falling from heights.

The show's focus on Pucca's crush could send iffy messages to kids about appropriate ways to show affection. Violence is also a common method of conflict resolution.