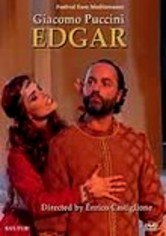 2007 NR 1h 29m DVD
Dario Balzanelli sings the title role of Edgar in this performance of Giacomo Puccini's second opera. Set in 14th-century Flanders, the story focuses on the romantic travails of a knight torn between his love for the virtuous Fidelia (Montserrat Marti) and his lust for the debauched seductress Tigrana (Halla Margret). Andrea Rola and Giovanni Tarasconi also appear in this production featuring the Coro and Orchestra Filarmonica Mediterranea.