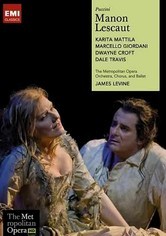 2008 NR 1h 32m DVD
James Levine conducts the world-renowned Metropolitan Opera Orchestra in this passionate staging of Giacomo Puccini's "Manon Lescaut," which features Finnish soprano Karita Mattila in a standout performance The New York Times calls "riveting." Filmed in high definition in 2008, this production was originally broadcast live in movie theaters across the country as part of an effort to bring professional opera to the masses.