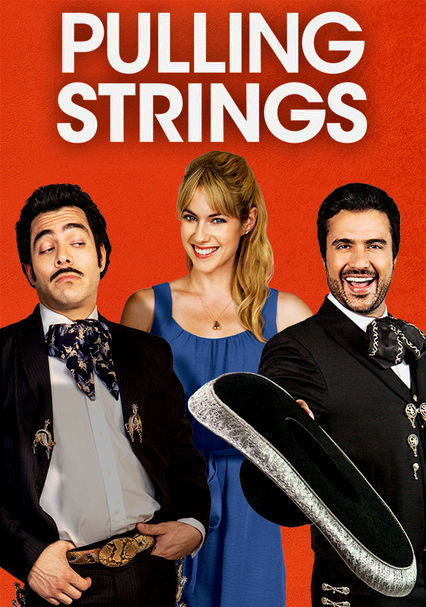 2013 PG 1h 52m DVD
On the eve of going to London to assume a new post, a diplomatic consul passes out at her farewell party and wakes up to find she's been rescued by a mariachi singer whose visa application she denied. But the rejection has slipped her mind.

Parents need to know that Pulling Strings is a subtitled movie in Spanish that involves a night of excessive drinking at a work party and the ensuing chaos. Expect some sex-related banter and mild profanity ("ass"). The film is otherwise a sweet, upbeat romantic comedy about putting down roots and what it means to really see people, with positive depictions of single fathers (with a deceased mother referenced briefly), family, and friendship, but, because of the subtitles, and because the action hinges on a night of partying, it's probably best for older kids.

Romantic/passionate kissing in a few scenes between a man and a woman. In one scene, a woman and a man kiss; then the camera cuts away as they enter the bedroom, and the next morning the woman is in the man's shirt, presumably to indicate intercourse occurred the night before. There is a consistent presence of sex-related banter, including two women toasting to David Beckham's butt, exclaiming that he "has a really good ass," and there's a joke made about a woman going topless to make money.

Very mild peril when thug-like characters intimidate and threaten a man, pulling back to hit him but then stopping.

Some mild profanity throughout, such as "hell," "working my ass off," and "I'm going to kick your ass."

Pulling Strings offers positive messages about putting down roots, trusting people, friendship, loyalty, and trying to see the person for who they are beyond your assumptions.

The film's premise involves one night of heavy drinking at a work party, showing two adult women downing shots and becoming increasingly drunk, as well as a few colleagues also being intoxicated, using slurred speech and stumbling. Casual smoking is shown briefly in a few scenes.