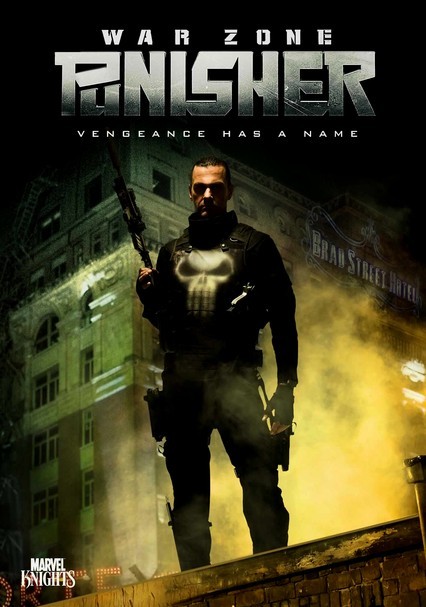 2008 R 1h 47m Blu-ray / DVD
When Frank Castle -- a one-man force of vengeance known as the Punisher -- battles mob boss Billy Russoti, the encounter leaves him disfigured. But Russoti soon reemerges as a psychotic villain with a small army at his command.

Parents need to know that this over-the-top action movie is unrepentantly violent, with a body count in the dozens and constant extreme, grisly depictions of hand-to-hand combat, gunshot wounds, explosions, industrial accidents, and much more. The movie's tone is also very moody and bleak -- it may be based on a popular Marvel comic book character, but it's not kids' stuff. It's more akin to the adventures of Dirty Harry than those of Spider-Man. Not only does the film tacitly endorse the vigilante "hero" and his violent methods, but so do law enforcement characters -- who either turn a blind eye to his activities or actively help him. Characters also use extremely strong language, drink, and use drugs (some are shown snorting cocaine).

A brief refrence to "screwing hookers."

The movie's body count is in the dozens, with constant, extreme, and bloody/gory violence -- including shootings, fights, bare-handed neck-breakings, decapitations, several point-blank shotgun blasts (viewers see the victim's face obliterated), stabbings, death by explosion, and more. A man stabs another man through the neck with the stem of a broken wineglass. A man is killed by having a chair leg thrust through his face. A man is seen devouring another man's kidneys after murdering him. A man is hurled into an industrial glass crusher; viewers see his face, stripped bare of skin and pouring blood (later his face is a grotesque patchwork of scars, grafts, and transplants). Several extremely detailed special-effects deaths -- like when the "hero" punches someone so hard that he penetrates their skull. A man is hurled onto the sharp metal posts of a wrought-iron fence.

The film's "hero" is a vigilante who fights New York's organized crime figures after his family is executed for accidentally witnessing a mob execution. His murderous work is in many ways secretly approved of by legitimate law enforcement personnel. He shoots and kills an undercover FBI agent and is tormented by this. Discussion of terror plots and biological weapons (which are to be sold "to the ragheads in Queens"). Some discussion of God's mercy and forgiveness and plan; the main character rationalizes his work by explaining that "someone has to punish the corrupt." A criminally insane character is referred to as "Looney Bin Jim."

Characters smoke, drink hard liquor, and are seen snorting cocaine. References are made to crystal meth and anti-psychotic drugs.