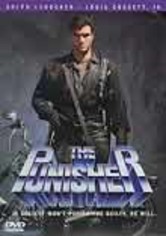 1989 R 1h 32m DVD
The avenging angel of Marvel Comics fame comes to life in this action-adventure thriller. Dolph Lundgren stars as Frank Castle, a veteran cop who loses his entire family to a mafia car bomb. Only his ex-partner (Louis Gossett Jr.) believes Castle survived the blast. Frank becomes The Punisher, a shadowy, invincible fighter of evil who hides out in a labyrinth of sewers and lives for one purpose: to exact brutal revenge on his mob enemies.