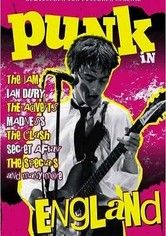 1979 NR 0h 56m DVD
Filmmaker Wolfgang Büld chronicles the massive outflux of punk music from London into the rest of England in this classic 1979 film that features interviews and live concert clips from punk-rock pioneers the Clash, Ian Dury and others. Raw performances of classic tunes such as "London Calling," "Hit Me with Your Rhythm Stick," "Police and Thieves" and more manifest the restless energy and outrage that fueled the punk movement.