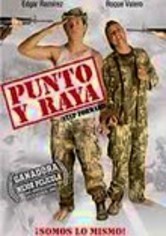 2004 NR 1h 45m DVD
Friendship finds a way to spring from the dull and bitter earth of hardship and violence in this film starring Daniela Alvarado, Pedro Lander and Dora Mazzone. A Colombian border patrol employee whose job is to keep drugs and rebels from entering his country strikes up an unusual friendship with a Venezuelan who sympathizes with his country's plight. Generosity like this isn't often rewarded, however, as evidenced by the film's tragic end.