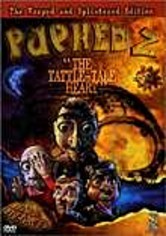 2002 NR 0h 34m DVD
In "The Tattle Tale Heart," the traveling Puphedz puppet show puts its own odd spin on Edgar Allen Poe's masterwork "The Tell-Tale Heart." But instead of giving us a straightforward adaptation of the story, the creators envision a world filled with a cast of characters that breach the realms of oddity. One character even shouts out a series of hilarious one-liners.