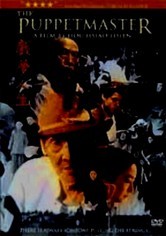 1993 NR 2h 22m DVD
Hsimeng Rensheng's fact-based film tells the story of famed Taiwanese puppet master Li Tien-Lu and the earth-shaking events that shaped his life from the early 20th century through World War II. The drama focuses on the Japanese occupation of China, during which Tien-Lu and his fellow artists were compelled to promote the Japanese cause. Tien-Lu appears as himself in his later years in this Cannes Film Festival Jury Prize winner from 1993.