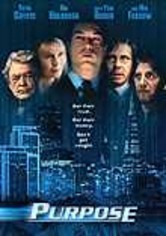 2002 R 1h 36m DVD
This incisive chronicle of the heady of days of the 1990s dot-com revolution follows young entrepreneur John Elias (John Light), who transforms an idea for an Internet application into a multimillion-dollar company but falls prey to the trappings of success. Swept up in a surfeit of wealth, cars and women, John's avarice soon engulfs him, putting everything he's worked for in jeopardy. Mia Farrow, Jeffrey Donovan and Hal Holbrook also star.