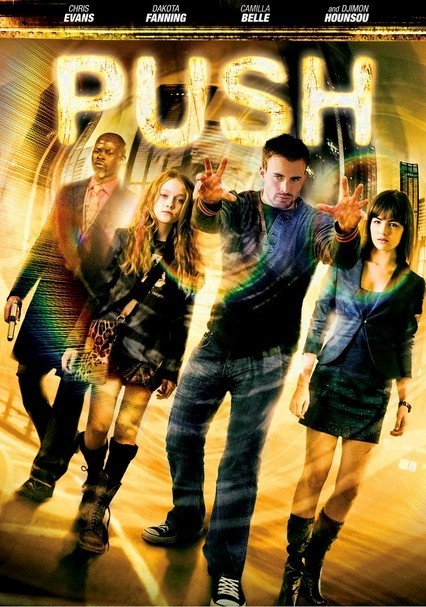 2009 PG-13 1h 51m Blu-ray / DVD
On the run from the Division, a shadowy government agency that uses people with psychic abilities to do their bidding, telekinetic Nick and clairvoyant Cassie join forces to find a third psychic who can help them destroy the organization.

Parents need to know that this sci-fi thriller about a group of psychic "supeheroes" stars Dakota Fanning and features lots of special-effects violence. Guns and other weapons are used, people are attacked with blasts of telekinetic force, bloody wounds are shown, and overall, the atmosphere is quite grim. Characters also smoke and drink; alcohol helps Fanning's 13-year-old character "focus her visions." Expect some swearing (including "f--k") and implied sex as well.

Kissing; implied sex; some caressing. A scene takes place at a "hostess bar."

Extensive sci-fi action and combat, including bolts of telekinetic force, and hypersonic screams of destruction. Also gun violence, fistfights, and martial arts combat. Several people are impaled with lengths of bamboo; others are hurled to their deaths or shot at point-blank range. Paranormal mind-controllers induce suicides through unbreakable psychic suggestion. Extensive surgical/medical imagery.

Government agencies are depicted as venal, power-hungry amoral mobs that use people with special talents as tools to get jobs done. Overall, the movie has a grim tone. The movie's heroes come together out of a sense of self-protection and self-assertion. A 13-year-old character is placed in several adult situations of peril, even brandishing a gun at one point.

Only a few brands -- Coke, Jack Daniel's -- are shown/mentioned. Due to the Hong Kong setting, many of the corporate logos in the film are unidentifiable or wholly in Chinese.

Characters smoke cigars and cigarettes and drink beer, wine, and hard liquor. A 13-year-old with psychic abilities drinks alcohol to "focus her visions" -- which, in the film's science-fiction world, works, but is also played for laughs.