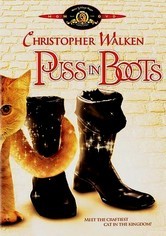 1988 G 1h 36m DVD
With unpredictable actor Christopher Walken playing a crafty cat, there's no telling what will happen in this live-action version of the classic Brothers Grimm fairy tale, which features singing, dancing and acrobatics. When young Corin, from his dad, he isn't too thrilled at first. But Corin's in for a surprise, as plucky Puss plans to help his master win the heart of a lovely princess.

Parents need to know the heroes of this centuries-old fairy tale are schemers and disguisers, but they do have a sense of fair play. Their goal is to make a better life for themselves while outwitting the foolish and ridding the world of villains. There are two potentially scary, storm-filled scenes in which a villain turns himself into a series of ferocious animals (lion, tiger, bear, vicious dog). But they're only threatening, and there are no attacks or battles. In the movie's first scene, the father of three young men is seen on his death bed and dies off camera. A naked young man is seen from the waist up swimming in a pond.

One character swims naked in a pond; he's only visible from the waist up. A kiss between the princess and her beloved.

In two cartoonish sequences, spooky music, wailing wind, and fiery lightning signal the presence of The Great Ogre ... an ugly, pallid man with soft spikes for hair and a ferocious laugh. The ogre turns into a roaring lion, a bear ready to pounce, a tiger, and a vicious dog. He only frightens, though -- he never attacks. A clever cat catches two mice and gobbles them up (off camera). A character dies off camera.

The story sends the message that a resourceful, clever being (in this case, a cat with good intentions) can outwit and overpower even the most powerful villain. Also, being spirited and emotionally true to yourself is better than being "genteel" and living a placid, feeling-free life. On the negative side, deceit and guile win the day, though in the process, a great evil is destroyed.

Wine is consumed at a royal banquet.