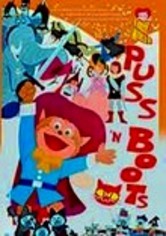 1969 NR 1h 20m DVD
An outlaw feline and the young lad who urges him to go legit embark on the adventure of a lifetime in this action-packed anime classic. Sword-wielding musketeer cat Pero is on the run from inept kitty cops. His crime? Rescuing mice from the clutches of doom. But when he meets Pierre, the miller's son, the two join forces to seek fame and fortune. Originally released in 1969, the cartoon features animation by anime master Hayao Miyazaki.