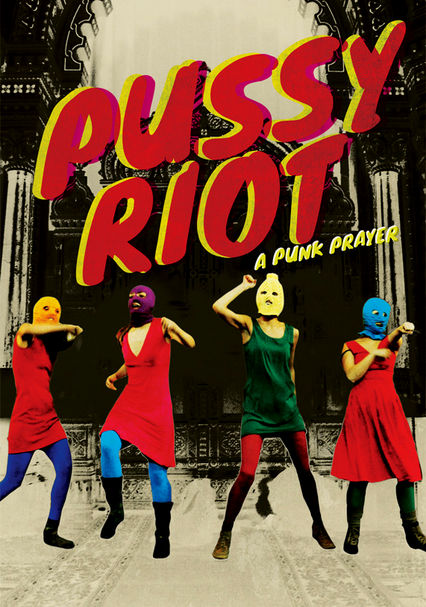 2013 NR 1h 27m DVD
A high-profile arrest made Russia's all-girl punk band Pussy Riot famous, but this documentary spotlights the women behind the colorful ski masks. For the first time, the group's three members discuss Vladimir Putin, their cause and life behind bars.

Parents need to know that Pussy Riot: A Punk Prayer is a documentary about a Russian protest group made up of young women that sometimes uses shocking methods to make its points. The central protest in the film involves a performance at a Russian Orthodox cathedral where the protesters sing sacrilegious lyrics, for which they are later arrested and jailed. There's also an event depicted where protesters have public sex (we see naked bodies and thrusting from three couples in the same room; breasts are visible, but no genitals; one of the participants is heavily pregnant). The young women and others use a few curse words and sing songs featuring violence and obscene language. Viewers will learn a lot about the history of Russian protest and the political and social milieu in Russia; they may also be given much to consider about the nature of protest and social change. Much of the movie is in Russian, with subtitles.

One lengthy scene shows members of Pussy Riot at an action with another art protest group at which men and women had group sex in a public place; we see thrusting and breasts but no genitals or genital contact. We also see what appears to be oral sex. One of the women copulating is eight months pregnant.

Viewers will see many scenes of protests, some of which include protesters throwing objects and police wrestling them roughly into their vehicles.

Aside from the word in the movie&#39;s title, a few four-letter words are used: &quot;They&#39;re f--king prosecuting!&quot; and &quot;God s--t!&quot; There is also some threatening language directed at the Pussy Riot prisoners, including when they are taunted that they will be &quot;killed in Siberia,&quot; and some repeated song lyrics, which contain references to violence, death, and bodily functions.

The value of art as a method of protest and the power of peaceful dissent are both spotlighted.

Pussy Riot has released a CD and we hear some of the songs featured on it.