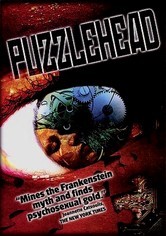 2005 NR 1h 21m DVD
In this futuristic psychological thriller, renegade scientist Walter (Stephen Galaida) duplicates all his memories and feelings in the android he's created. Soon, the robot feels drawn to Walter's secret crush, Julia (Robbie Shapiro), and the trio forms a bizarre love triangle. As the distinction between Walter and his mechanical alter ego becomes increasingly distorted and Julia's loyalties are torn, the fates of all three take a deadly detour.