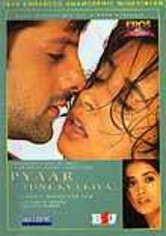 2001 NR 2h 31m DVD
This Fatal Attraction for the Bollywood set tells the story of Jai, a photographer who persuades a reluctant model to pose for him, only to find himself -- a married man -- caught between the model's amorous attentions toward him and a jealous wife. But don't be fooled by the suspenseful tone -- plenty of the requisite musical numbers are still served up, against the backdrop of picturesque Goa.