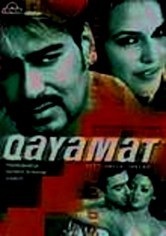 2003 NR 3h 0m DVD
Ali (Arbaaz Khan) and Abbas (Sanjay Kapoor) are partners in crime engaged in a dangerous game of cat and mouse. Along with Laila (Ishaa Koppikar), they constitute the biggest arms dealership in Asia. With America keeping an eye on Europe and Asia, India is a heavenly route for arms dealers who filter weapons through the former Soviet Union. But before long, Akram (Suniel Shetty), a by-the-book CBI officer, cracks down on the weapons traders.