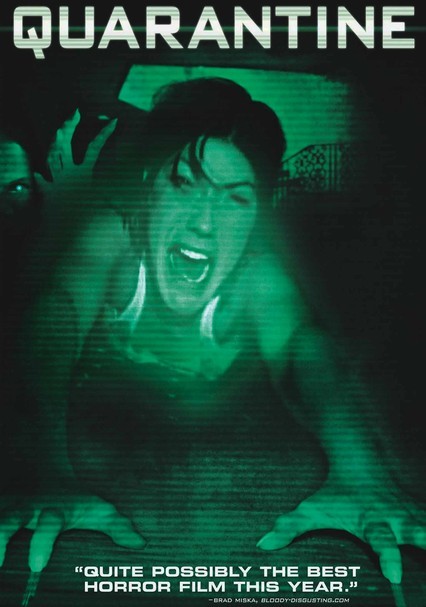 2008 R 1h 29m Blu-ray / DVD
While on assignment shadowing firemen, a Los Angeles news reporter (Jennifer Carpenter) and her cameraman (Steve Harris) get trapped in a quarantined apartment complex with a vicious unknown killer. With all forms of communications cut, the news crew keeps the cameras rolling as they search for a way to escape rabies-infected zombies. John Erick Dowdle writes and directs this frenzied horror film that also stars Johnathon Schaech.

Parents need to know that this horror movie is absolutely terrifying, full of gore and terror and violence. Grisly wounds are shown in great detail, and tension builds to a fever pitch. The victims -- hungry, angry, mindless zombie-like creatures -- are the stuff that nightmares are made of. Parents should also know that the film's style -- all of the action is seen through the lens of a single news camera as it follows a group of firefighters on a "routine" call -- makes for an upsetting, frenetic, and intense viewing experience. There's also some swearing and sexual innuendo.

Some sexual innuendo and implied off-screen nudity; a firefighter bets he can "bang" a reporter before the end of the night.

Near-constant, unrelenting horror violence, gore, and tension. The victims of a genetically engineered virus become aggressive, biting and attacking anyone in their path; there are also shootings, fatal falls, bludgeoning, and beatings. The film's central conceit that all the action is being filmed by a news crew leads to a scene in which an infected berserker is literally beaten to death with the camera. Animals are seen attacking humans; animals are seen eviscerated. Wounds and injuries are depicted with grim realism.

Extensive depiction of extreme circumstances of horror as the dwindling survivors in a quarantined apartment building are attacked by the victims of the virus; the outside world not only fails to offer help but actively shoots and attacks any of the people desperately trying to get out. Mention of "doomsday cults" and "nuclear, biological, and chemical" attacks.

A character is clearly drunk; another character offers his Vicodin stash to help a veterinarian try to aid injured characters.