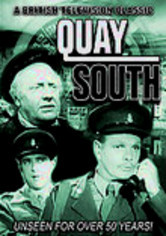 1955 NR 0h 54m DVD
Facing pressure from authorities to relinquish control of his ship the Ebb Tide, Capt. Daniel Thwaite (Roger Livesey) struggles to decide what course of action he should pursue in this riveting military drama set in 1940 northeastern England. Based on a novel by Howard Clewes, this episode from the "ITV Television Playhouse" series co-stars Michael Bates, Miriam Karlin and Peter Barkworth.