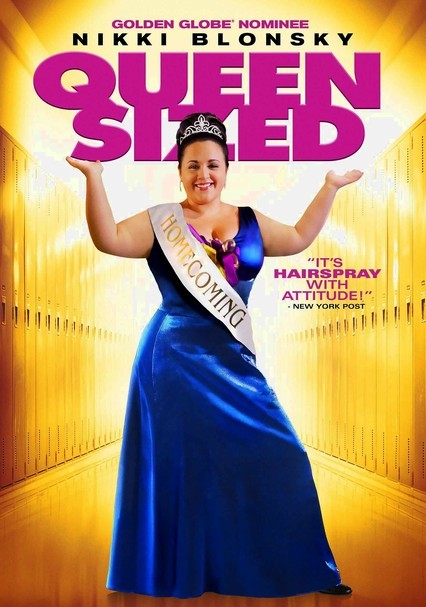 2008 NR 1h 27m DVD
Nominated for homecoming queen as a joke, overweight Maggie (Nikki Blonsky) decides to stick out the competition to empower her fellow high school outcasts. But when she becomes a local celebrity, Maggie's ego grows and she loses sight of what's really important. With her once-loyal outcast followers turning against her, Maggie must come to terms with her newfound fame -- and with herself. Annie Potts, Lily Holleman and Liz McGeever co-star.

Parents need to know that although this made-for-TV movie -- which stars Hairspray sensation Nikki Blonsky -- has central messages about acceptance, body image, and eating issues that are good for tweens, too, there are several things that make it a better choice for teens only. For one thing, teen characters are shown drinking with no consequences, and there's at least one mention of teens having sex. Girls are also frequently shown in their bras (although you could argue that that's no worse than what the average kid sees on MTV every day).

Girls are shown in bras while changing in the locker room. In another scene, a girl stands in front of the mirror in her bra looking at her body. Other girls are shown showering naked, but only from the back up; no sensitive body parts are shown. One teen character mentions making out with her boyfriend and thinking she might be ready to have sex.

During an argument, a girl pushes her friend to the ground, causing her forehead to bleed, but she's punished by the school for her actions.

Mild curse words like "crap" and "damn" pop up occasionally, in addition to the more descriptive "bitch-slapping" and "lard ass."

The overarching message is that a girl doesn't have to be perfect to be crowned homecoming queen. But the story isn't as simple as "good girl wins; bad girl loses." The queen in question is an overweight teen who has a serious problem with binge eating. But even though she's portrayed as a heroine, her unhealthy actions aren't made out to be heroic, and she confronts her issues with food in the end. And the "bad girl" isn't a typical stereotype, either; she's a nice girl with a good head on her shoulders.

Underage teens are shown drinking beer and margaritas at a party.