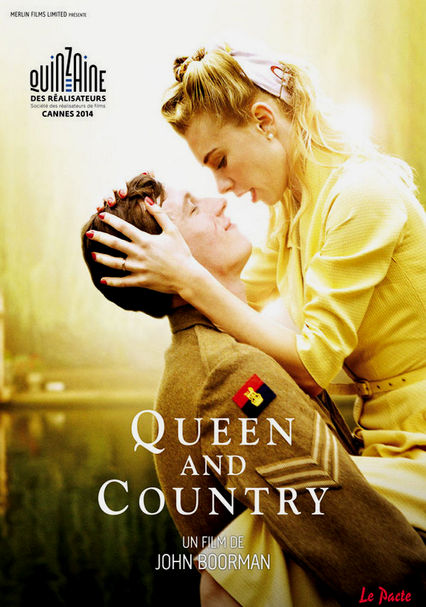 Parents need to know that Queen and Country is the sequel to director John Boorman's autobiographical WWII drama Hope and Glory (1987). Set in 1952, the sequel has a coming-of-age feel, with the main protagonist (and stand-in for Boorman) now an 18-year-old conscript in the British National Army. The movie follows young Bill as he serves his country in the post-WWII era, befriends other soldiers, and struggles with superiors still reeling from the war. Expect frequent strong language ("f--k," "s--t," "wanker," "a--hole," etc.) and a couple of scenes that show a woman partially nude: A woman bares a breast to a peeping soldier she's attracted to, and a woman strips to go skinny dipping (her butt is seen). There's also a non-graphic sex scene and much talk among the soldiers about sex, virginity, and which female celebrities they find beddable (like Jane Russell and Elizabeth Taylor). Characters drink and smoke (typical for the time period), and some soldiers' wounds are shown (amputations, shell shock). With its various commentaries on politics, class, and love, Queen and Country is a thought-provoking period film for mature high school-aged teens.

Much discussion of virginity and sex, but only one actual sex scene. It's quick and shadowy; viewers see kissing and then two characters on a bed together -- he has his trousers down, and she has her legs wrapped around him. Earlier in the movie, a character catches two soldiers peeping on her nurses' dormitory, and she presses a bare breast against a window. Best friends reveal that one had sex with the other's girlfriend, and the other with his friend's sister. A woman disrobes to go skinny-dipping; her butt is in full view.

Two soldiers have a fist fight, two friends push and shove each other, a woman is hospitalized. An officer visits a military hospital full of injured soldiers, including an amputee and some suffering from shell shock/PTSD.

Explores the theme of what it means to be a patriot who may not always agree with the policies of his/her country, the importance of thinking for yourself even as you follow rules, and the mysteries of attraction and romance. Also reveals how class-conscious English society was -- and why it was so limiting for people in terms of who they could/should marry or fall in love with.

Adults smoke cigarettes (or "fags" as the Brits call them) -- as was typical of the time -- and drink on a regular basis.