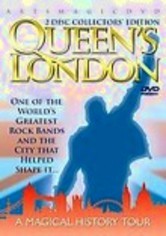 2007 NR 2 discs
Discover the bustling sights, sounds and personalities of the city that influenced and gave rise to one of rock 'n' roll's all-time greatest bands, Queen. Featuring interviews with key people who knew and worked with Freddie Mercury, Brian May, Roger Taylor and John Deacon, this film offers a rare glimpse behind the spectacle to chronicle Queen's ascent from a struggling band named Smile to international superstardom.