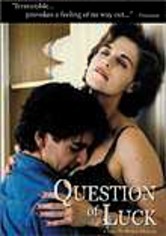 1996 NR 1h 42m DVD
Julio (Eduardo Noriega) is jobless, but his luck takes a turn when he finds a corpse -- and a collection of jewels. When he meets a mysterious French woman named Marie (Anna Galiena), his life takes another dramatic turn in this Rafael Moleon-directed neo-noir. Julio has a girlfriend who he was going to marry, but after getting entwined with Marie, those plans might change -- if he can outrun Marie's ex.