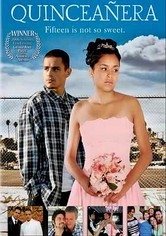 2006 R 1h 30m DVD
On the brink of her 15th birthday, Magdalena finds her comfortable existence shattered by the discovery that she's pregnant. Cast out by her parents, the once-privileged teen finds safe haven with a great-granduncle and a gay cousin.

A young man is forcefully removed from a party (brief punching and pushing).

Some use of the f-word, other obscenities.

Young people learn to cope with adults' dedication to tradition.

Characters drink wine and liquor at parties and smoke cigarettes.