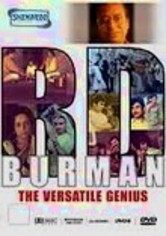 2005 NR 2h 15m DVD
One of Bollywood's greatest film composers, R.D. Burman has scored hundreds of Indian films. The son of singer and composer Sachin Dev Burman, he began scoring films in 1961 and continued working well into the 1990s. With 331 movies on his résumé, not to mention TV serials and documentaries, Burman has had a career like few others. Included in this compilation are songs such as "Do Lafzon Ki Hai," "Duniya Mein Logon Ko" and many more.