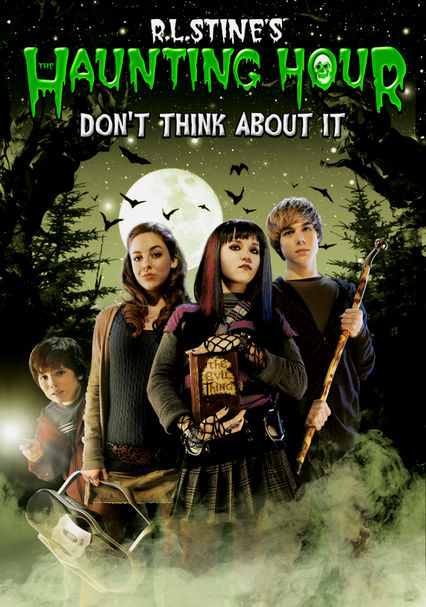 2007 PG 1h 27m DVD
Based on the writings of popular children's author R.L. Stine, this spooky, family-friendly tale follows a teenage girl named Cassie who struggles to fit in at her new school and lashes out by playing outrageous pranks on the cool kids.

Parents need to know that while this movie is from the same people who created the creepy, crawly series Goosebumps, it's more of an ad for products like Papa John's Pizza than anything else. Parents should also know that Cassie does some pretty antisocial things, like terrorizing her little brother with ghost stories, hiding in his closet to scare him, and filling a pinata with roaches so Priscilla will be covered in them -- all because she's angry that she had to move and Priscilla humiliated her. Parents should also know that the movie gets pretty scary at different points, especially when the kids attempt to kill The Evil Thing.

Flirting between Sean and Priscilla and Cassie and Sean, but no kissing.

Lots of creepy violence, including a slimy monster with babies encased in eggs on its back. The pizza delivery guy, Max, and Priscilla get captured by The Evil Thing and wrapped up in a cocoon. The babies almost eat Max. Max throws blood on The Evil Thing and it kills itself by biting itself to death.

Lots of jealousy and conniving among girls, including Priscilla threatening Sean and Cassie filling a piñata with roaches, which rain down on Priscilla. Cassie also intentionally terrorizes her brother with scary stories and pranks.

With a coupon in the DVD box for a free Papa John Pizza and a Papa John delivery guy figuring prominently into the plot, they only forgot the scratch-and-sniff pizza stickers. You'll also find an Aquapod, an iPod, and the Berenstein Bears. There's also a video at the end for a song by star Emily Osment.