RFK: His Life and Legacy 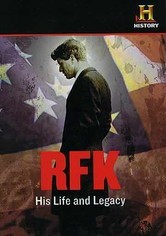 RFK: His Life and Legacy

2009 NR 3h 20m DVD
A national symbol of hope and promise during the turbulent 1960s, Bobby Kennedy stood on the brink of political greatness when he was tragically murdered. This program explores his life and legacy through interviews and rare archival footage. Having served as a U.S. senator, attorney general and trusted presidential adviser, RFK was seeking the Democratic nomination for president when he was ruthlessly gunned down in 1968.