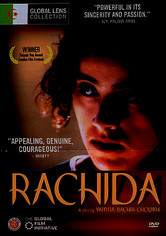 2002 NR 1h 40m DVD
In this moving feature film, Rachida (Ibtissem Djouadi) is a confident young elementary school teacher living in the African nation of Algeria during the 1990s, a time of great turmoil and unrest in the country. Rachida's life is turned upside down when she finds herself at the center of an assassination attempt after she stands up to a terrorist group by refusing to plant explosives in her classroom and put countless lives in jeopardy.