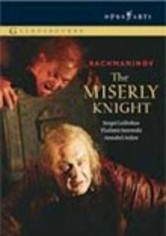 2004 NR 1h 35m DVD
This dramatic presentation of Sergei Rachmaninoff's moody one-act opera features Sergei Leiferkus as "The Miserly Knight," a man so consumed with his wealth that he brings about his own demise. Filmed live at the Glyndebourne Opera House in 2004, this production also features vocalists Richard Berkeley-Steele, Maxim Mikhailov, Viacheslav Voynarovskiy and Albert Schagidullin, backed by the London Philharmonic Orchestra.