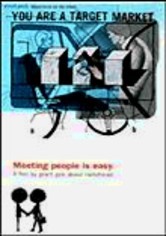 1998 NR 1h 30m DVD
Music video director and documentarian Grant Gee follows Radiohead on a tour across Europe, Japan and the United States following the phenomenal success of their third album, "OK Computer." Through a fascinating combination of concert footage, interviews and behind-the-scenes material, Gee provides an intimate look at the downside of stardom and the alienation and monotony inherent in international tours.